This is historical fiction, with some embellishments and changes to a true tale, that is set in the 1720s in a small English town. The wife of a local farmer appears to be giving birth to dead rabbits, leaving the town’s doctor in a state of bewilderment and causes an outpouring of belief, as it appears that people are desperate to find something that is both part of, and beyond, God’s will. 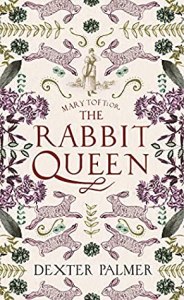 This is a bit of a strange one. I enjoy a retelling of a folk tale/a bit of history, and the elements of the original story, alongside the actual historical setting, were really well-weaved together. There’s a bibliography at the end, and I really appreciate that in historical fiction.

However, the story itself is quite a simple one – woman gives birth to rabbits, everyone is amazed! – with some elements added to it, which means that, despite being a relatively short novel, it feels as though it could be considerably shorter and more concise in the telling, or make better use of the new characters and their relationships to pad it out further, such as Zachary and Anne.

There were some nice elements that were well told, though. The appearance of the travelling circus/freak show set the scene well for deception, disbelief and the desire to believe in the extraordinary. As did the commentary around women producing distorted children that had been affected by what the woman felt or did during her pregnancy – a really interesting idea and one I’d like to read more about from the bibliography.

There were also some really interesting points that were well-made and well-illustrated by events of a similar time – of the rich seeking to show their power and dominion over others, when their wealth is so great that it just continues to accumulate, by finding perverse pleasure in control or other grim activities. The arguments about humanity worked well but were a bit preachy when they came.

There were also some elements that readers might find graphic or uncomfortable. I was surprised by how forthright that part of the story was, as there’s little to leading up to it to set that kind of tone. Incidentally, I’m sure there was another word used at the time for a penis other than ‘yard’, although it did make me chuckle.

All in all, not bad, and I enjoyed learning more about a story that I think I’d briefly heard in passing before.

3 thoughts on “Review: Mary Toft; or The Rabbit Queen by Dexter Palmer”