Well, this completely threw me. I got froth, romance and gala balls, but with an unexpected amount of substance! 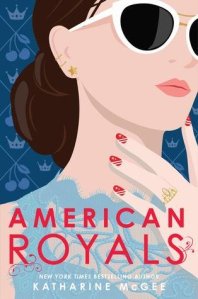 I found this whole novel strangely addictive. I was expecting something more akin to Princess Diaries-style fluff (which is enjoyable at the right times) but instead ended up with something that had a bit more … substantial. This story is a ‘what if’ George Washington had been offered a crown, instead of a Presidency.

We have Princess Beatrice, heir to the throne and obedient to the Crown and to her parents in every way. Samantha and Jefferson are twins, sharing a relationship and closeness that Beatrice will never be able to have, as well as a freedom away from the throne that she may never be able to enjoy.

We also meet the ‘common’ best friends of Sam and Jeff – Ethan and Nina – fairly regular people who have become part of the royal circle, whether they have been dragged in, or made their way there.

And finally there’s Daphne, Prince Jefferson’s ex. She is delightfully scheming and kniving – making her both the most fascinating and the most empty character. I would love to see more of her development.

As a non-American, I enjoyed some of the little pointers to American history and the names that went with it. I don’t doubt that it brushed over some of the darker aspects of American history or issues in American society (a slight nod to slavery at one point, references to some native American duchies. Very few mentions of people of colour – apparently one Latina character is enough to balance this???) and I think that risks losing some readers.

To be honest, I don’t know if this novel would actually work as well for an American audience. I’m British, we have a royal family (for better for worse), which people find more accessible through shows like The Crown. Our royal family is simultaneously a joke and a point of pride and, by growing up in Britain, we are oddly used to that dichotomy.

Yet to me, American Presidents seem to be treated as royalty, which meant that, for me, there was little leapt in imagination between a presidential family and a royal family. I enjoyed that speculative element. Perhaps it would have been a safer bet to have an imaginary royal family?!

As one reviewer on Goodreads writes: “George Washington would never.’

Happily for me, that wasn’t a problem.

There were a few things I didn’t enjoy – 4 men + 4 women = 4 relationships, right? And only bad girls actually sleep with a man (good girls stay pure). And I think raising the ages of all of the main characters would have made this a lot more relatable and poignant – much of what they were saying fitted with an older age bracket, even if some of the concerns and problems became more relevant with issues of a monarchy.

But THAT ENDING. It was not what I expected, and that totally redeemed the whole story for me. I can’t even talk about it because it’s too spoilery.

But because of THAT ENDING I can’t wait to read the next book. I suspect this may be a very personal choice.

If you’ve read American Royals, I would be really interested in what you thought – especially if you strongly disagree!

One thought on “Review: American Royals by Katharine McGee”